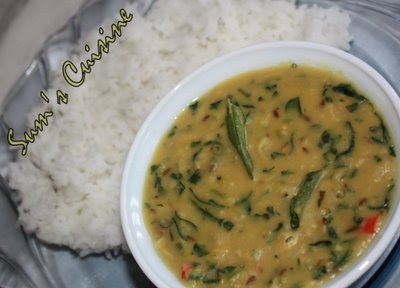 There’ll be times when you don’t feel like cooking or eating anything complicated or spicy and just wish for something very simple – but yet tasty. The routine Rasam and Sambhar are just too boring to give them even a thought. Cutting vegetables, grinding spices are just out of question. But then the appetite? And your wish to eat good food?
It was one such weekend, when only both of us were home. (Well, that’s when I can be so lazy as well as try any new thing without getting worried how it’ll turn out!). And I wanted to cook something very quick and get back to my relaxing mode :P. At the same time, didn’t want to disappoint Dee with boring stuff either!
I remembered a dish which I had had at a restaurant the week before – ‘Methi Malai Matar’. And there was a bowl of methi leaves left over; I didn’t want to waste it either. But I didn’t feel like using any matar that day. So, I decided to make a variant of Dee’s favorite – Dal in that style!
So I started out cooking the dal and in parallel worked on the Methi combination. And in 15-20 minutes was ready a cool new variety of dal, yummy with hot rice or chapathis. The addition of cream gives it a totally different taste.
Cooked by Sum 4 comments: 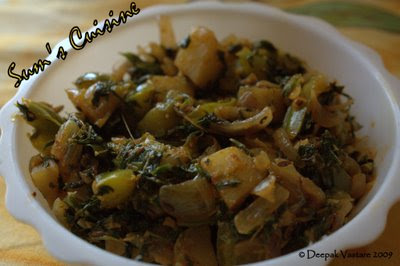 It was one of those mundane weekday mornings, where I have to drag myself off bed and go to the kitchen to join MIL in cooking - something needs to be cooked for breakfast and something to be packed off for lunch as well. And everyday it’s the same question – what do we have for breakfast? And what’s for lunch? Once or twice a week decide on the easiest – chapathis and some palya or gojju and there comes a bored voice..... ohhhh..... the same thing today???
Oops...... it’s a difficult task to think of and cook something new half an hour before you need to start to work. Unless it’s planned for and some preparation, at least mentally, has gone into it, cooking a new thing in the mornings is not something I prefer. I rather prefer to do it in the evenings or on weekends.
To add to it, that day there was not enough vegetables too.... all I had was a bunch of methi leaves, and a capsicum. But what do I cook for 5 people out of this small quantity??? But then, there’s always potato and onion on shelf – which I do not consider as vegetables(!) and I can make use of them too, can’t I?
So, I started out to make a combination of all these, along with mostly north Indian set of spices (which is not-so-common at home). And I came out with a new, dish, which everyone enjoyed with chapathis!
And here it is.....
Cooked by Sum 2 comments: