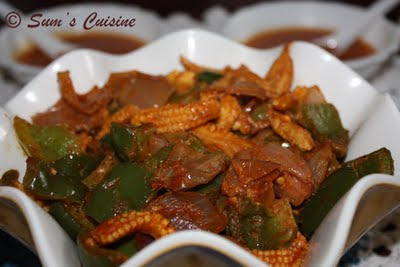 I hate deep fried starters especially when entertaining large crowds. That’ll make me confine to the kitchen when the guests arrive, and by the time I come out and manage to sit with them, I’ll be like a burnt veggie myself, after batches and batches of deep frying!!
This one is a no-fry quick fix starter, that fits well when cooking for large groups as well. Keep all the veggies ready and it can be made in a jiffy. The spices and other ingredients can be varied as per your tastes. 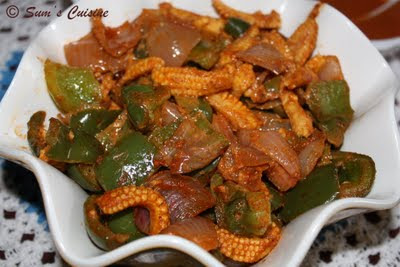 Method:
• Chop onions into quarters and capsicum into bite sized chunks
• Slit the baby corn and chop into bite size pieces
• Meanwhile in a wide pan, heat 1 Tbsp oil and add chopped onion, garlic and green chilies
• When done, add capsicum and sauté for a few seconds - don’t over cook the capsicum, retain the crunchiness
• Transfer to a bowl and keep aside
• In the same pan, heat remaining oil and fry the baby corn
• Cook covered on low flame till tender
• Mix in the reserved onion and capsicum
• Add salt, sauces, vinegar, ajinomoto if using and stir thoroughly
• Adjust salt and pepper as per taste and optionally garnish with some chopped scallions and serve hot
• Goes well with flavored rice as an accompaniment, or as a starter as is

Notes:
• Make sure this is not made much ahead, as the veggies tend to become over tender if kept for long. Tastes the best when served immediately
• The quantity of sauces used can be varied as per your taste - no hard and fast rule on the exact measures
Cooked by Sum 4 comments: 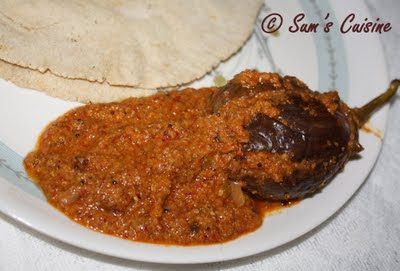 This, as I said, is a ‘made in heaven’ combination for Jolada rotti. Nothing else tastes as good as this with Jolada rotti or vice versa. Being one of my FIL’s many favorites, this gets done on some special occasions, exclusively for him :)! 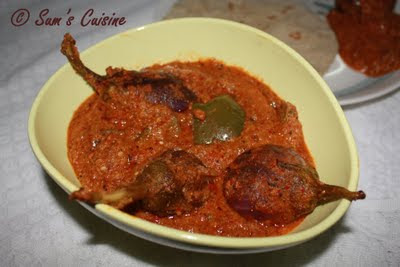 Little tender purple eggplants, slit and stuffed with a spicy peanut based paste, cooked slowly to tender in a heavy bottomed pan, letting the eggplants absorb all the flavors from the masala... Tastes awesome-est with Jolada rotti. Also good with chapathis/rotis. 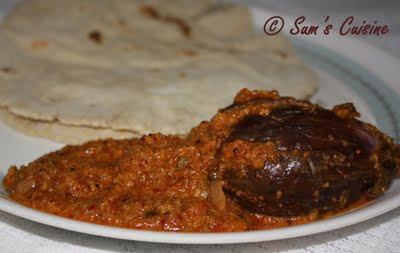 It does take some time to make these, but not too much either. Just a little extra time, than your routine cooking and you’ll be ready with mouth watering, king of gravies! Slow cooking of eggplants gives an extra good taste and texture to the eggplants. However, if you’re pressed for time and still want to have this, then the pressure cooker also does help! Of course you should take extra care not to make the eggplants too mushy-mushy, but otherwise, you end up with an amazing gravy. 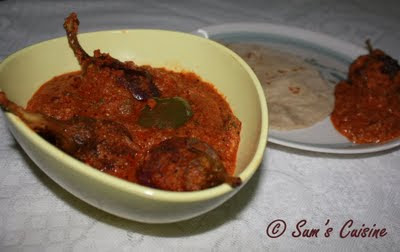 Method:
• Wash the eggplant and pat dry
• Slit them one by one in a + mark - starting from the tip to ¾ the length, keeping the stem as it is
• Heat 1 tsp of oil in a pan and roast the dry red chilies, peanuts, dals and coriander seeds
• Once almost done, add onions and sauté till golden brown
• Cool it, add to it coconut and salt and grind to a thick paste, adding very little water, only to facilitate the blades
• Stuff the slit eggplants with this ground masala, filling each with about a table spoon of the paste and keep in a plate. Reserve the remaining masala for later use
• Heat the remaining oil in a another wide, thick bottomed pan - preferably non stick or a cooker
• Add the chopped onion, garlic, and sauté till golden brown
• Place the stuffed eggplants one beside the other, with the stem up, arranging in a single layer
• Cover and cook on medium heat for 10-15 minutes, turning over the eggplants in between, till they are cooked tender
• Make sure the bottom doesn’t brown, by keeping the flame medium to low
• Add the remaining masala and adjust the consistency with sufficient water. The gravy thickens as it cools
• Taste for salt and heat and add more if required. If u need more heat, add some red chili powder at this time
• Cover and cook till the gravy begins to boil. Stir it occasionally, but very very gently so that the eggplants are intact
• Switch off the flame and serve it with Jolada rotti and enjoy. It’s a nice combination with usual chapathis / rice too.

Notes:
• This dish takes patience and time - the slower the eggplants cook the better the final dish is.
• Be very gentle when stirring
• Using no stick pan helps in reducing the quantity f oil used
• If you’re in a hurry, you can cook the whole mixture in a pressure pan for less than a whistle; but you need to be extremely cautious with the time, else you’ll end up with mushy eggplants
• Pick up little and tender eggplants
• Can also stuff and add capsicums along with eggplants
Cooked by Sum 13 comments: 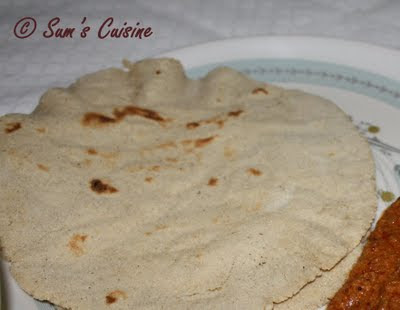 Jolada rotti or rotis made of jowar flour is a famous staple of northern Karnataka and parts of Maharashtra. In northern parts of Karnataka, it is typically served with spicy side dishes, the most famous being Ennegai - a spicy curry of stuffed eggplants, and a dollop of butter.
Here in Bangalore, we get the best jolada rotti in Kamat chain of hotels, where they have unlimited meals - Jolada rotti oota. The waiters keep serving you hot rotis one after the other, served along with many mouth watering side dishes, including the famous ennegai and you keep on hogging one after the other! In some of the outlets, they also have live Carnatic music played softly alongside, making the food even more pleasurable. 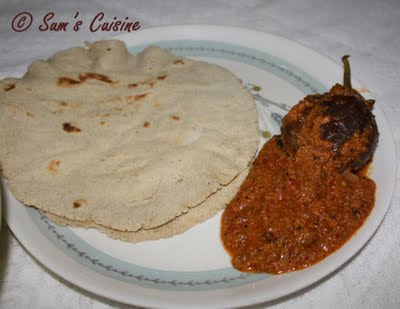 Traditionally, jolada rotti is rolled by patting the dough with just fingers/palm, without using rolling pin, turning the roti in a circular motion, thus increasing the size and making thinner. Yes, it does require special skills for that and is labor intensive - at least, we, with little experience in that feel so! So we adopt an easier, method for making these rotis, using a rolling pin, just as we roll parathas/chapathis. It does come out equally good with lesser effort!
Here’s how we make it...

Method:
• In a heavy bottomed pan, boil water by adding salt and a few drops of oil
• Once water starts boiling, add jowar flour and let it remain for 3-4 minutes on medium low flame
• At the end of 3-4 minutes, take off from heat and using a strong ladle continuously stir, avoiding lumps
• The resulting dough should be similar to that of papad dough - soft, but non sticky
• When slightly cool to handle, divide the dough into 3-4 parts and knead it well, smearing a few drops of oil. See tips and tricks below for easier ways.
• Once the dough is kneaded well into a soft but firm dough, take big lime sized balls and roll it using rolling pin like a chapatti/roti. Use a little amount of jowar flour
• You can roll all the rotis and stack then one on top of the other. It doesn’t stick to each other
• Heat a griddle on high flame and put one roti at a time. After a few seconds, brush the top of the roti with some water using a pastry brush or clean cotton cloth dipped in water. This avoids the rotis from becoming too dry
• Flip it and repeat for the other side
• Cook it till small light brownish spots appear.
• Repeat the same with rest of the dough
• Serve hot with some butter or ghee and a spicy curry, preferably Ennegai (A stuffed eggplant curry)

Notes:
• To avoid your palms getting burnt while kneading the hot dough, fill it in thick polythene and cover it in a towel / thick cloth and knead it over it. This way a smooth and soft dough will be ready in a jiffy
• It is easy to knead the dough when hot rather than juggling it when it gets colder
• Knead it, make into balls before you start rolling. This saves time and effort, and it gets easier to roll and then cook simultaneously
• The better you knead, the easier it is to roll. If the dough is not kneaded well, while rolling the rottis start cracking and gets difficult to handle
• While rolling, if the edges crack, smoothen the edges with finger tips and continue rolling to get smoother edges
Coming up soon - Ennegai - the 'made in heaven' combination for Jolada rotti... Stay tuned!
Cooked by Sum 6 comments: 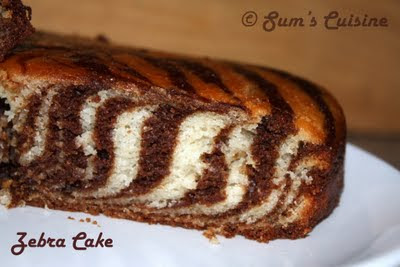 Now that I had a perfect eggless sponge cake recipe, I wanted to tweak it myself to make something else... something that is more special and different. Agree that the Zebra cake is doing rounds in the blog world for quite sometime now, but I hardly found an eggless version! That made me try it out myself, and here is the outcome. 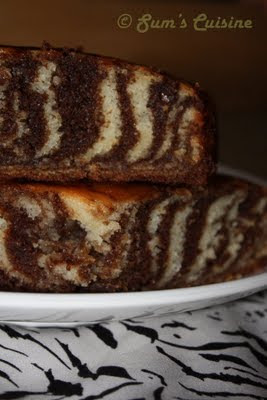 It has a lovely texture, is very easy to make, is butter-less, has very few easily available ingredients, and most of all, is Eggless! And it has a nice contrast of vanilla and chocolate flavors and colors making it awesomely appealing!

I baked it with little niece Hima around and told her it was a Zebra Cake. She hesitated for a moment and replied, ‘No, atte!! It is a tiger cake - it is not black and white, it is brown and yellow’! Ohh right!! It is a tiger cake, isn’t it? ;) Had you ever thought of this?! Procedure:
• Pre-heat the oven to 200C/400F. Grease a round pan and set aside.
• Powder the sugar and in a bowl, mix the curd and sugar till the sugar dissolves.
• Stir-in the baking powder and baking soda into the curd mixture. Mix well and set aside for 2-3 minutes. The curd will turn frothy and start rising and increasing in volume.
• In the meanwhile, sieve the flour thrice and set aside.
• Add the oil and vanilla essence to the curd mixture. Stir gently so that the air in the mixture is not lost.
• Next, gently fold in the flour. Don’t stir very vigorously; do it gently. The batter should have a dropping consistency. (Since I used set curd, the batter was a little thick still)
• Divide the batter into 2 equal parts
• Mix the cocoa powder and coffee decoction without any lumps
• To one part of the cake batter mix this coffee-cocoa mixture and stir to incorporate
• To the other part, mix in 2 Tbsp of milk to adjust the consistency 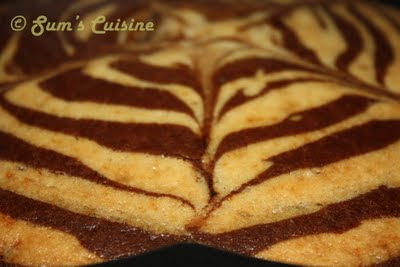 Assembly:
• Place the greased pan on a flat surface
• Pour 1 Tbsp of plain batter in the middle of the pan;
• Without shaking the pan, pour the brown batter over the first
• Repeat with the two batters alternately till the entire batter is used up
• Do not even touch the pan in the whole process; the batter will spread by itself and reach the circumference
• Lower the temperature to 180C/350F, and bake for 35-40 minutes, till the toothpick inserted comes out clean
• Once done, remove from oven and let the tin cool on a wire-rack for 10 minutes. Run a serrated knife around the edges and upturn the cake from the tin and let it cool on the wire-rack for a good amount of time before you can slice it.
• Once fully cooled, slice the cake with a serrated knife and enjoy it with a cup of tea or as is!

(I can NEVER wait for the cake to cool!! So always, my first piece would crumble since it would be barely warm when cut!!) 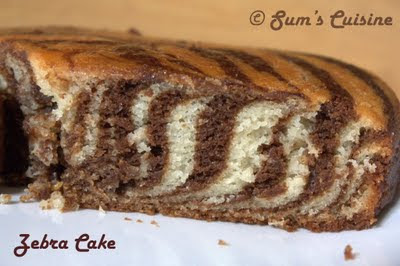 Notes:
• Do the measurements of the ingredients accurately - Oil can be reduced by a Tbsp or so